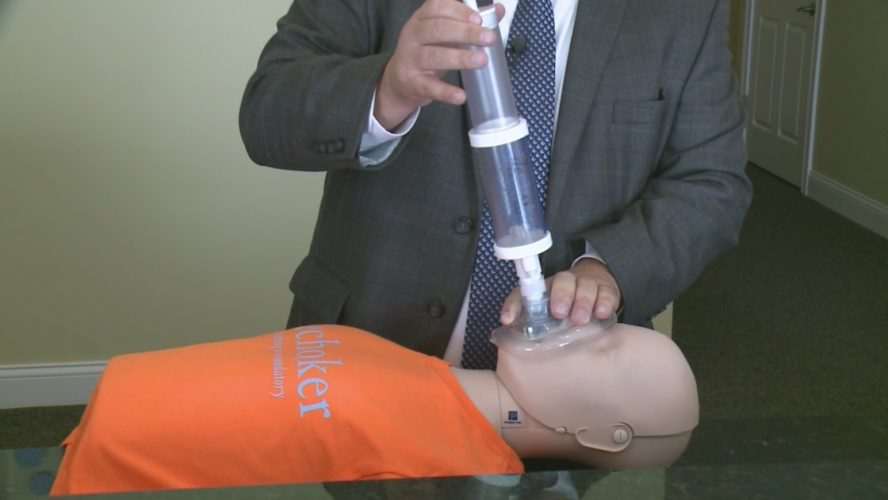 A rescuer realizes that someone is unable to breathe and responds with a syringe-shaped device that includes a long tube and face mask.  The rescuer places the face mask on the victim, inserts the tube into the victim’s throat, pulls the plunger up which “sucks” a blockage from the windpipe, and restores the victim’s airway.

Here is a video of the Dechoker in action, removing sausage from a passageway.

It seems to be a sound judgment call that any device using vacuum pressure and the face mask seal should be able to help choking victims by giving enough safe suction to remove an object stuck in an airway.

Unfortunately, there is scant evidence, yet, that the device works to save lives.  It may be a great new alternative to a typical first-aid response, but the jury is still out.  The FDA “approval” mentioned on the Dechoker.com website is a misnomer at best and misleading at worst:  the device is simply registered and listed with the FDA, not approved.

Now, many medical devices aren’t considered “high-risk,” so the approval process isn’t necessary.  The Dechoker Press release regarding FDA registration labels the device as Class II, which doesn’t require FDA approval.  But it is wise to be at least a bit skeptical about devices that use the FDA “seal of approval” when it has never been awarded.

Methods and techniques for choking first-aid, including back slaps and abdominal thrusts (i.e., the Heimlich Maneuver)  are important topics in emergency response because of the frequency of deaths related to choking.  The National Safety Council, in its Injury Facts 2015 publication reports that “choking is the fourth leading cause of unintentional injury death.  Of the 4,800 people who died from choking in 2013, 2,700 were older than 75.”

Understanding and being able to administer choking First Aid is a big deal for parents and children, too.

More than 1200 children died in 2013 from suffocation, most under the age of one year.  And for every choking-related death, there are 100 ER visits each year, according to the Centers for Disease Control.

Food, such as hot dogs, is one of the biggest culprits.  Every five days, a child in the US chokes to death while eating.

The good news about the Dechoker is that the device is available in sizes that may be able to help you rescue a child or an infant.    The more frequent choking First Aid techniques used for adults often have to be modified for the smaller bodies.  This father in Chicago saved his son’s life using abdominal thrusts (sometimes called chest thrusts or the Heimlich Maneuver).

“I recommend that my students learn how to respond to a choking emergency by first using Chest or Abdominal Thrusts,” said Jeffery Guernsesy, owner of San Diego’s Beating Heart Center.   Abdominal thrusts are one of the American Heart Association (AHA) and American Health Safety Institute’s (AHSI) recommended first steps to take when rescuing a choking victim.

Perhaps using the Dechoker device will be added to the recommended response action steps in future if reports in field use reflect claims made by the device manufacturer.    Regardless of the Dechoker’s success or failure rate, First Aid and CPR training are still critical.

The father who saved his son using the Heimlich Maneuver recommends that parents take certified First Aid training classes, download one of the free first-aid apps for smartphones and remember to call 911.

First Aid and CPR training classes are available almost every day of the week for very low cost using gamified learning systems to enhance lesson retention.  You can even access the materials in an online and in-person hybrid format that cuts down on time spent traveling to classes.

If you live in or around the San Diego, California area, be sure and check out the schedules for American Heart Association and American Health and Safety Institute Certified First Aid and CPR Classes at the Beating Heart Center.