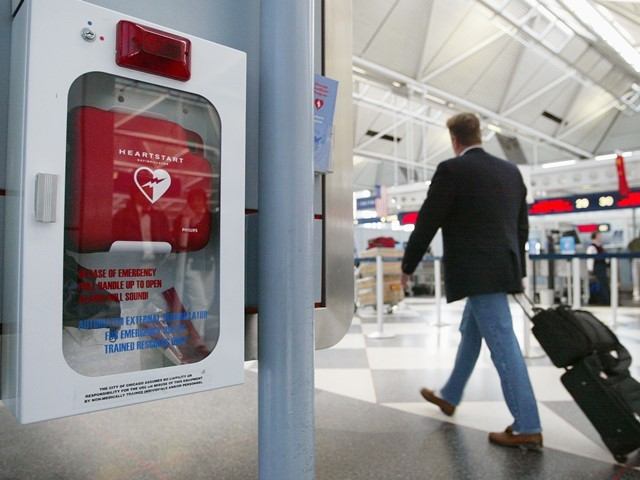 How many times have you seen this emergency scene on television?  Someone in the hospital calls a “code red!”   A nurse or a doctor runs into the patient’s room, rubbing red chest paddles together and yelling “clear!”

Then the rescuers applying the paddles to a person’s chest which shocks the person back to life.   If that’s how you imagine an automated external defibrillator works — well, you may have been watching too many medical dramas.

Don’t buy into the medical myths.  Turn off the tube and find yourself a certified CPR/AED training class instead.    There isn’t any paddle rubbing going on when someone is using an AED.  And AEDs won’t bring someone back to life if they have a “flat line” heart beat.

But AEDs do shock an irregular heart rate back to normal.  And the technology itself is quite the lifesaver if used correctly.

According to the American Red Cross, 350,000 people of all ages will suffer from sudden cardiac arrest (SCA) each year.       An AED is the only effective treatment for restoring a regular heart rhythm during sudden cardiac arrest that is also an easy to operate tool for someone with no medical background.

It’s important to keep this in mind as victims of sudden cardiac arrest can be any age – especially young people who you would never suspect might succumb to an attack.

For example, sudden cardiac arrest is the leading cause of death for young athletes and research shows AED provides survival benefits in public and athletic settings.   AEDs can even be used to intervene on sudden cardiac arrest occurring in victims of hypertrophic cardiomyopathy, such as the 13-year-old You Tube Star Caleb Logan who passed away last year.

The American Red Cross is so convinced that AEDs are effective and easy to use by the general public, that the organization recommends everyone in the country be within a 4 minute reach of an AED.

So the next time you are in a public place like an airport or a school, take a quick look around.  You should see one of these orange, red or blue boxed defibrillators nearby.

But you probably don’t.

According to the San Jose Mercury News, “experts say that many people are afraid to use them and many building owners and school districts are leery of purchasing the devices because they are fearful they’ll end up being held liable and sued.”

But that barrier, as well as other administrative hurdles, has just recently been removed in California, thanks to Senate Bill 658 signed into law by Governor Brown last summer that took effect January 1st, 2016.

The law exempts organizations and responders installing and using the AED from civil liability as long as certain fairly straightforward conditions are met.   You can find more information about AED civil liability exemption conditions here, in particular those that pertain to California schools.

One example of how the administrative burden has eased is that heads of schools of principals are no longer required to designate trained employees who are available to respond to emergencies that may involve an AED.

Other school employees or nearby volunteers are able to jump in and help with resuscitation since modern AEDs are designed to be used by any motivated bystander, regardless of training.

Technology is easing access to CPR/AED training and improving learning retention.  Now that the legal concerns around AED use are being addressed, it’s an even better time to turn off the television and head down to your local CPR/AED training class to learn how to save a life – in real life.